The year 1630 would mark a new phase in Rubens’ life, with his wedding to Helena Fourment in December, the titles received from the kings of Spain and England and his purchase of the Steen estate for 100,000 florins, among other things. He would produce The Garden of Love (ca. 1630/32, Museo Nacional del Prado), The Feast of Venus (ca. 1636, Kunsthistorisches Museum, Viena) and the Louvre’s The Village Fête from 1630/35 over the course of this decade, works that reflect the new character that his life had acquired. However, his concerns regarding the ongoing war that affected the region also continued during this period; the conflict would culminate in a definitive split between the Northern provinces and those of the South, where Holland and Belgium are today. These preoccupations are what may have led him to produce works in which peace and prosperity threatened by war appears as a theme. We can cite Peace and War (The National Gallery, London), Minerva Protects Pax from Mars (Alte Pinakothek, Munich) or The Horrors of War (Galleria Palatina, Florence). Allegories of war and peace also appear in the iconography he used in Entry of Cardinal-Infante Ferdinand in Antwerp, in addition to other representations of abstract ideas such as Good Governance, Fortune, Opportunity and Virtue in order to establish ethical and moral discourses.   With a determined theme in mind, the artist worked rapidly with a sure hand, laying out an “invention”, or solution for a particular theme in just a few brushstrokes, which either he or a member of his studio would then transfer onto the canvas under his supervision. This was the case for the works destined for the Torre de la Parada, several of which have been preserved. This would also have been the case for our sketch, although no other work based on it is known of. Alfredo Hirsch acquired it in 1947 as Thetis and Minerva, titled after the two women seen in it. One is seated on a sphere to the left, covered by a draped cloth that barely covers her legs and floats off behind her. An oar rests next to her and she embraces the woman at her side with her right hand intertwined in hers. The woman on the right is covered by a red tunic and a blue cloak and wears a helmet.This work can be associated with Allegory of Fortune and Virtue at the Musée Grobet-Labadié in Marseilles (1), a work done by Rubens’ studio between 1630 and 1635, where the same women as in our work can be seen, but in inverted positions. Two other figures appear behind them, a winged elderly man who unfolds his wings, carrying a clepsydra in his left hand, accompanying a fourth figure, a woman with a distinguishing head and lock of loose hair that the figure wearing the helmet attempts to grasp. Michael Jaffé, who discovered this work, considered it to be an “allegory of Good Governance”—the figure with the helmet—who, following Fortune’s advice, tries to grasp Opportunity and is accompanied by Time, the elderly winged man. Erwin Panofsky later identified these figures as Fortune and Virtue with a specific reference to our work, where the elements are reduced to only the most significant ones (2). Rubens seems to have depicted friendly ties here, reaffirmed by the figures’ right hands coming together, allowing Panofsky to interpret this theme in relation to Cicero’s phrase, Virtute duce, comite Fortuna, which is “with Virtue as a guide and Fortune as a companion”. Similar iconography can also be seen in Allegory with a View of the Fortress of Antwerp (3) from 1634, at the Musée des Beaux-Arts de Besançon.
by Ángel M. Navarro
1— Tempera and watercolor on white paper, 37.5 x 36.5 cm.
2— For more detail regarding this work, see: Navarro, 2001. The work has underpainting that should be studied in greater detail.
3— Wood panel, 64.6 x 50.5 cm. See: J. Held, 1980, nº 275, p. 368. 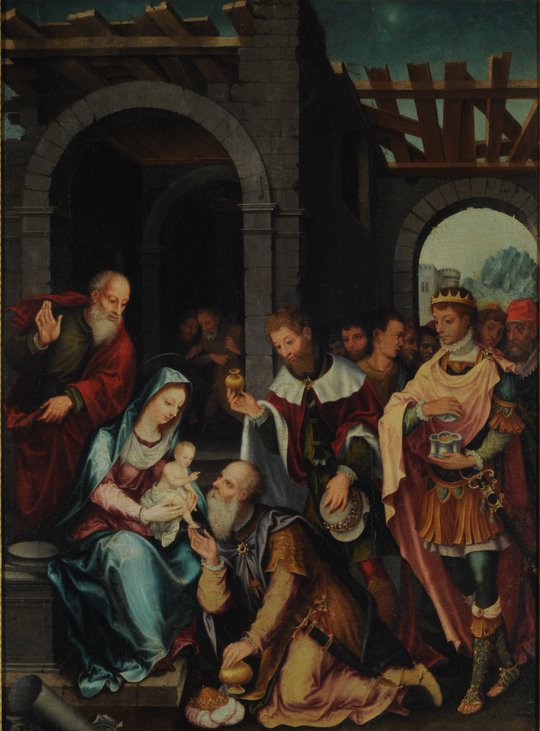 El rapto de las sabinas (The Rapture of the Sabinas)