Vincent van Gogh came to paint this Moulin de la Galette (The Blute-Fin Windmill, Montmartre) in quite particular conditions that might well qualify as a transition, and the work fits within a series of views he produced of Paris. The Dutch artist arrived in France’s capital in March of 1886. There he contacted his brother Theo—without any prior notice—who had already spent seven years based in Paris, managing a small gallery on Montmartre Boulevard on behalf of Boussod et Valadon.
Van Gogh paints his Moulin while in a state of amazement, impacted by the surrounding artistic context, which was of unusual density: Moréas’ symbolist manifesto, the latest impressionist exhibition (in which Seurat presented La Grande Jatte), Rimbaud’s Illuminations and L’oeuvre (The Masterpiece) by Zola all crowded into the local cultural scene. He was also discovering the city’s charm: its arcades, animated conversations in its cafés and the works at the Louvre, a museum he would visit frequently. To top it all off, he added an academic touch in the midst of this frenzy by enrolling as a student in the very classical Cormon studio, to hone his technical skills. There he alternated with Toulouse-Lautrec and Anquetin.
It is well known that Van Gogh set out upon his career with a determination that was as humble as it was profound, and the months he spent in Paris undoubtedly awakened a powerful inner desire to create. The Butte Montmartre was part of his everyday life, given that he stayed in Theo’s house, located in that neighborhood. Although the ties between the two brothers were indeed very strong, in Fall of 1886 the promiscuity that prevailed at 54 Lepic Street—from which the panoramic view of the city was magnificent—began to weigh on him. This led Vincent to replace still lives, painted inside the apartment, with landscape. At the outset, this impulse drove him to represent the immediate surroundings, and as such, Montmartre (1).
“Moulin de la Galette” is understood to be the café-concert that actually stretched between two mills on Montmartre: the Blute-Fin mill and the Radet mill. In Renoir’s famous composition titled Le bal du Moulin de la Galette (Dance at Le Moulin de la Galette, 1876, Musée d’Orsay, Paris), we witness the parties and dances that marked the rhythm of life there. It was not the windmill itself, however, that had interested the impressionist painter. Van Gogh, on the other hand, adopted a completely different attitude. In this case he concentrated on one of the two buildings involved in the café-concert: the Blute-Fin, an old construction made of wood, built in 1622 and still in operation grinding wheat.
The point of view he chose for the mill—the rear part of the building—was not original in any way; at that time any number of painters (with which the Montmartre neighborhood was saturated) also chose it as a motif. We do know, however, that Van Gogh tried out various other views of the motif in order to better circumscribe it. The painting has an incredibly clear, fresh aspect, where vivid brushstrokes of blue leaning toward white dominate in very homogenous tones. The low-angle perspective employed by the artist generates a low horizon line that allows the grand, luminous sky to burst forth. The same Van Gogh who had labored fervently on his dark De Aardappeleters (The Potato Eaters) in April of 1885, suddenly appears exultant due to his contact with the Paris environment. It is true that he had already begun to lighten his palette in Anvers under the influence of Rubens’ paintings, but Montmartre inspired him, especially in terms of a much lighter handling of atmosphere. It is understandable, then, that he would have written in 1887 to one of his artist friends (H. M. Levens): “There is nothing like Paris, and as difficult as life may be here, and even though it were worse and even harder, the clean French air cleans the brain and does one an enormous amount of good” (2). The tricolor flag fluttering in the wind, represented with a few nervous brushstrokes, is another perfect representation of this triumphal plenitude on French soil.
Similarly, we can observe that Van Gogh selected a view that does not allow any of the diversion of the Moulin de la Galette to be detected. He clearly has a pictorial interest in the place, but also the desire to show a place of work on the border between the city and the countryside, in what was still one of Paris’ peripheral neighborhoods at the time, inhabited by humble folk. The couple seen to the lower right indicates scale but they are also modestly attired, almost dressed as peasants. Van Gogh slips a social dimension into this work that is particularly moving.
We can confirm, then, that this oil painting is an excellent testimony to the euphoria that the Dutch painter experienced wandering around Paris, and at the same time it is a typical example of a tableau-laboratoire. In it, Van Gogh serenely experiments with plastic concepts that would eventually find absolute realization several months later in the south of France, in Provence, a region that “[would] clean the brain” (as he had written) with the combined intensity of madness and genius. 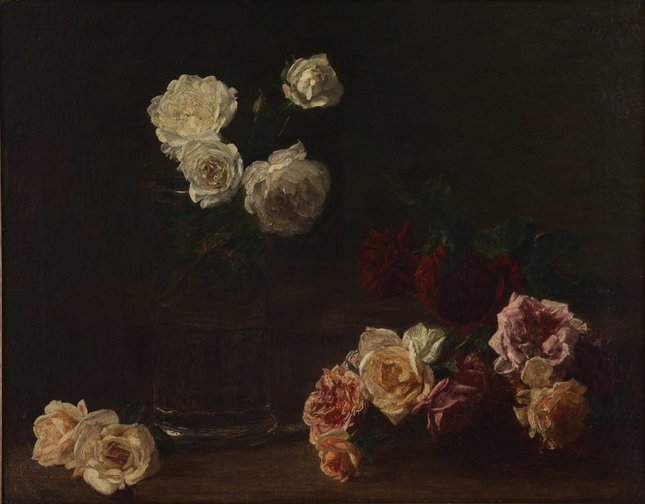